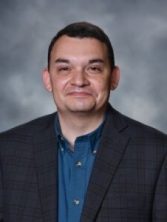 Jeremy began his formal training at Stivers School for the Arts where he studied voice, drama, and piano.  Jeremy’s love for music lead him to the University of Dayton where he earned his Bachelors Degree in Music Education.  For the past 18 years he has served as a music teacher in private and religious schools.  As an arts educator, Jeremy directed show choir, handbell choir, liturgical ensembles, and musicals that won the MTI Excellence in Performance Award making him an award winning theatrical director.  Jeremy has also done graduate course work at Vandercook College of Music.  His greatest joy in life is sharing his love for the arts with people of every age.